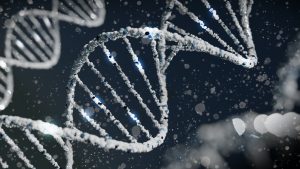 Across the life sciences, digital technologies are leading to dramatic improvements in the analysis and manipulation of genetic information. Vast electronic databases that contain genetic sequence data on everything from plant mutants over laboratory rats up to the SARS-CoV-2 virus can now be mined with big data analytics in order to produce both novel scientific insights and practical inventions with diverse benefits for society. At the same time, the use of digital sequence information in contemporary biotechnology raises complex legal as well as ethical questions.

The outbreak of the COVID-19 pandemic has led to the most remarkable global scientific cooperation of our times. From its very beginning in early 2020, scientists all over the world have been sharing data, knowledge and research results with each other at a scale that we have never seen before. The decentralised, global scientific response, a shimmer of light in a world that sometimes appears to become darker every day, has saved millions of lives and provided societies with the tools for pushing back against the relentless spread of the SARS-CoV-2 virus.

This scientific response would have been unthinkable without the massive sharing of viral genetic information through open-access databases accessible through the internet. This is part of a broader trend: databases containing vast amounts of genetic sequence data have been around for many years. Some of them are narrow in scope. GISAID, for instance, is a database initially developed for sharing digital sequence information related to avian influenza. Today, it also provides the largest online repository for digitalized SARS-CoV-2 sequences. Other databases are huge beyond comprehension. The International Nucleotide Sequence Database Collaboration, an initiative that pools genetic information held by major European, Japanese and US-American databases, has recently surpassed a size of 9 Petabytes – roughly equivalent to the combined storage capacity of 18.000 contemporary laptop computers.

The increasing use of digitalised genetic sequence information, from the biomedical field up to agriculture and plant breeding, produces a wide range of scientific, commercial and other benefits. But it also raises questions. For many biological materials, international law requires that its users obtain the authorisation of the original providers, and share with them the commercial profits, intellectual property or other benefits that result from the use of the material. For instance, a pharmaceutical company operating out of the United Kingdom could not simply take samples from a plant used in Indian natural medicine and develop it into a commercial product. This would require the consent of the Indian authorities and the sharing of benefits such as the resulting commercial profits.

The international legal requirements in this area are complex and diverse. For the most part, they do not apply to genetic sequence data directly but only to the biological materials that these data come from. This is possibly about to change. For several years, negotiations have been underway in various international forums on tighter regulations for digital sequence information. This includes the World Health Organization with its programme on pandemic influenza preparedness. It includes the Law of the Sea Convention, where governments are presently negotiating a new agreement that would, among other issues, regulate the biotechnological use of the marine biological materials found in international waters. And it also includes the Convention on Biological Diversity, where governments will meet for a high-level summit in April 2022 in order to negotiate the contours of global biodiversity policy for the coming three decades.

The decentralised, global scientific response, a shimmer of light in a world that sometimes appears to become darker every day, has saved millions of lives and provided societies with the tools for pushing back against the relentless spread of the SARS-CoV-2 virus.

Digital sequence information is only one among many issues that governments will need to resolve at this upcoming mega-conference, to be held in the Chinese city of Kunming. Politically, however, it is highly explosive. The governments of rich countries oppose the regulation of digital sequence information due to the expected negative impacts on research, development and innovation. This sentiment is shared by many in the scientific community, apprehensive of possibly having to confront new and substantial bureaucratic barriers in the future. At the same time, many governments of developing countries are arguing that large amounts of digital sequence information derive from biological materials which are under their national sovereignty – as such, they cannot simply be expropriated and used abroad, just as, for example, Spanish mining companies cannot simply dig for gold in Italy without proper permission. In addition, there are strong ethical reasons for ensuring that the benefits associated with modern biotechnology and digital sequence information are distributed in a somewhat fair manner between societies. Unrestricted data access allowed the rapid development of COVID-19 vaccines. Once vaccines had been developed, though, the first in line were the populations of rich countries, irrespective of the medical needs in developing and least-developed countries. One powerful argument for the regulation of digital sequence information is better control over the distribution of whatever comes out at the end of the R&D pipeline. If access to digital sequence information creates a legal obligation to share the benefits associated with resulting commercial products, this does provide leverage for correcting global injustices – while also likely harming public and non-commercial research by creating bureaucratic and other costs.

The problem in this debate is that neither side is necessarily wrong. Solutions that take both sides duly into account are hard to come by, even more so when

considering questions of political feasibility. Ignoring the problem is only going to make it worse, though, as digitalisation is increasingly undermining international mechanisms, under the Convention on Biological Diversity, the World Health Organization and elsewhere, that were initially designed to redress some of the global injustices in the wider fields of biotechnology, biomedical sciences, but also agriculture and plant breeding. In our scientific project on “institutional adaptation to technological change”, funded by the Research Council of Lithuania, we try to find answers to the question of how (and why!) international institutions should respond to technological challenges such as digital sequence information. One solution would be to give up on the idea of regulating individual transfers of biological materials and digital sequence information, instead of mobilising financial resources by raising a minuscule tax on commercial users from the pharmaceuticals, agricultural and other sectors, using an international minimum rate for avoiding tax competition between countries, and disbursing the levy through an international fund in order to finance health- and environment-related projects in developing countries – all this without creating any sorts of financial or regulatory obligations for non-commercial scientific research.

Taxes are never popular. Governments are much more likely to kick the can down the road – deciding on additional negotiations and technical consultations in order to delay the inevitable moment when choices will need to be made. The Kunming conference this April would, in any case, be a good place for governments to demonstrate that they have learned the larger lesson of the COVID-19 pandemic: that solutions to complex global challenges cannot be both effective and fair without strategic foresight and anticipatory action.

Florian Rabitz is a chief researcher in the Research Group Civil Society and Sustainability at Kaunas University of Technology, Faculty of Social Sciences, Arts and Humanities. The project “Institutional adaptation to technological change” is funded by the Research Council of Lithuania under grant no. P-MIP-19-513.