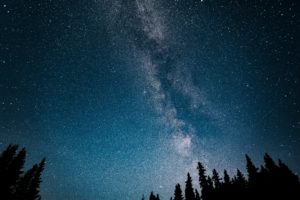 Roughly 170 metric tons of platinum are being mined worldwide every year, corresponding to approximately 5.6 billion Euros at current spot market prices. The metal is primarily used for manufacturing catalytic converters, which reduce air pollution from diesel and gasoline engines.

Platinum is also used for the construction of hydrogen fuel cells, a “green” technology that might turn out to be vital for reducing the emission of planet-warming greenhouse gases from the global transportation sector. Yet platinum mining is expensive, environmentally harmful and, in some countries, connected with substantial human rights abuses. But what if the earth is not the only source?

Possible solutions – in a single asteroid

The asteroid UW-158, discovered in 2011, may hold platinum in the range of millions of tons. This does not make it unique: Many asteroids in our solar system contain literally astronomic amounts of platinum and other metals that are critical for manufacturing semiconductors, computer chips, batteries, solar panels and practically any other high-tech product we might think of. Some of these asteroids contain deposits valued in the trillions of Euros under current market prices.

Hypothetically, a mining operation on just one single asteroid might be enough to provide Earth with a practically limitless supply of platinum-group metals or rare earth elements – enough for securing the deep and global transition towards clean energy technologies, enough to reduce political conflict over strategic resource access, and enough to significantly reduce the environmental and social footprint of the global mining industry.

Rules for the benefit of humanity

A space economy is slowly emerging. SpaceX, founded by Elon Musk, is the first private company in history to launch vehicles into space. Today’s civilian space industry has a market size in the range of hundreds of billions of Euros, comprising products and services that include launch systems, satellite-based communication and navigation, remote sensing, ground operations, as well as space tourism, among others. Innovation in launch systems, with decreasing cost-to-orbit and increasing payload capacities, is greatly improving access to space. While asteroid mining is likely still many years in the future, its potential consequences for the global economy, as well as for sustainable development, make it necessary to think about robust and effective rules early on.

As part of a research project on institutions and technological change, funded by the Research Council of Lithuania, we are developing governance options for ensuring that the benefits of asteroid mining would be globally distributed in a fair and equitable manner, rather than being appropriated by the private space industry.

There is substantial legal precedent for such a solution: in principle, international law gives all countries, and even humanity-at-large, the right to participate in many of the benefits associated with the exploration of outer space. And the international law of the sea already provides an elaborate set of rules for sharing the commercial profits of deep-sea mining in those parts of the oceans that are outside of national jurisdiction.

For asteroid mining, such a system could involve standardized contracts that commit mining companies to share a fixed percentage of their commercial profits into a multilateral fund, to be used for closing the technology gap between industrialized and developing countries; unrestricted asteroid access for scientific exploration under the condition that research data are shared openly and unconditionally; an international space agency that represents the interests of humanity in regards to the space mining industry; and the certification of technical standards for reducing space pollution associated with mining operations.

All of these are initial and open-ended considerations for an industry that might not get off the ground for years to come. As with any economic sector that requires significant capital investments over long time horizons, consistent and predictable regulation is essential. For asteroids, this must necessarily include clarification on the role of private property rights in outer space, relative to the rights accorded to humanity and the international community under contemporary space law.

And as we can see every day, we might be living in times when it is more important than ever to anticipate global challenges and opportunities as early as possible, including for the early development of robust governance frameworks.

Eglė Butkevičienė is a full professor and Vice Dean of science at the Faculty of Social Sciences, Arts and Humanities, Kaunas University of Technology. She lectures and researches on civil society, social innovation, and the social impacts of technologies.

The project “institutional adaptation to technological change (ADAPT)” is funded by the Research Council of Lithuania (LMT), grant no. P-MIP-19-513.