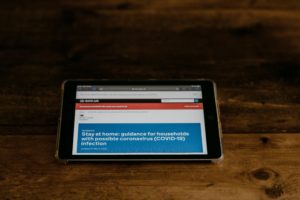 The coronavirus pandemic is historically unique, not in terms of its epidemiological profile, but in the drastic policy measures with which governments worldwide have attempted to contain the outbreak over the past few months. For the public response, the perceptions of the threat are more important than the threat itself. The construction of threat perceptions, in turn, depends to a large extent on the role of the mass media.

In a new project funded by KTU, we apply machine learning techniques to the mass media coverage of global pandemics, mainly focusing on the US media. So far, our analysis of roughly 12000 news articles published between January and June 2020 shows that the impacts of the pandemic and policy response measures on everyday life is the most-frequent topic under discussion in the mass media discourse. We also identify a variety of topics related to economic impacts, including supply chain disruptions, unemployment and bailout packages; as well as pharmaceuticals, notably including medication such as Remdesivir and Hydroxychloroquine, that are being promoted by parts of the US conservative establishment despite a lack of evidence for their efficacy and safety in the treatment of COVID-19 infections.

We also note some remarkable shifts in the way that the news media debate has evolved since January 2020. The role of China and the Chinese government dominated the early debate, but has gradually been fading out of view. The same applies for pharmaceutical interventions: roughly one third of the initial debate revolved around vaccines and antivirals, yet from February / March 2020, this share stabilizes at less than one tenth. As the economic impacts of the crisis are becoming more apparent, we also witness an increase in the frequencies with which bailout packages and unemployment are being discussed. The impacts of the crisis on everyday life are also being discussed more frequently over time.

Once we map out how the different topics which we identify in the US news media are linked together, we find two broader clusters: one dealing with economic impacts and policies, the other dealing with health care, governance, politics and everyday life. This suggests that media coverage largely proceeds along separate tracks, with the two clusters only being linked via discussions of the impacts on low-wage workers, particularly in the meat industry. Coverage of the Trump administration takes place within the context of social media (possibly driven by the US president’s notorious use of Twitter) and the subnational units of US federalism (likely due to the conflicts over the legal competencies of governors to impose and ease lockdown measures without approval from the federal government).

Our analysis is still in the early stages and the above picture may still change as more data become available. In one of our next steps, we will extend this approach to the media coverage of other pandemics in order to assess whether there are fundamental differences with the ways in which the coronavirus pandemic is being mediatized. As the coronavirus crisis proceeds, however, we might also see a pattern that is familiar from previous viral pandemics: its perception as a unique, game-changing catastrophe at first, and its gradual disappearance into the collective memory hole after.

Florian Rabitz, a senior researcher at the Faculty of Social Sciences specializing in the governance of environment and technology.

Augustė Nalivaikė, a doctoral candidate and lecturer at the Faculty of Social Sciences working in the fields of media, communication and political science.

Alin Olteanu, a senior researcher at the Faculty of Social Sciences and a postdoctoral researcher at RWTH Aachen University working on semiotics, communication and multiculturalism.

The project “A Topic-network Approach to the Mass Media Representation of Pandemic Threats (TOPNET)” is funded by KTU’s Special Research, Development and Innovation Fund (grant no. PP59/2016).