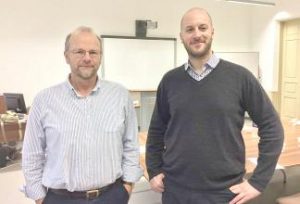 “Our research focuses on two countries geographically in the margins of Europe – UK and Lithuania, and both of them are currently undergoing a conflicting time”, says Dr Johann Unger from Lancaster University. Unger, together with his colleague researcher Dr George Green carried out a pilot research, based on student writing experiences at Kaunas University of Technology (KTU).

“As a linguist I am interested in how national identity is constructed, in how do we talk and write about it. Britain is currently undergoing a conflicting time, and Lithuania has undergone transition from Soviet regime to the European Union. These are interesting case studies”, says Unger.

During the interdisciplinary research conducted by Lancaster University researchers in the field of linguistics and creative writing, the participants were asked to rewrite the given text in English by making it “Lithuanian”. There were no specific indications as to what “Lithuanian-ness” contains.

Coming from different fields of interest the researchers could apply the interdisciplinary approach during interpreting and discussing the results of the study. Unger is interested into the investigation of national identity trough linguistics, whereas Green is focusing on the narrative behind the national identity.

“For the focus group we picked writers that only begin their career and gain skills in their learning process. As we are taking into account creative writing and the academic sides of the process, there is a very interesting common ground – a student way of looking at the world. The country’s national narrative usually starts in schools, when children learn from teachers, history classes, later on the process moves to the universities. Therefore, it is quite a good idea to access that knowledge in students”, says Unger, who is particularly interested in critical discourse analysis and language policy.

According to him, when coming from different perspectives, the research findings benefit to even broader fields of science.

Researchers also elaborated on the translation aspect of the study.

“How does translation work when we do not have correct translation, which usually happens? How can then we understand each other? Anyone who writes sees this as an interesting problem. If you write or talk in your own language you usually fall into a familiar and comfortable pattern, but talking about your subject in a foreign language helps discover clearer view on the subject. There are also historical examples: for instance, Becket wrote in French, which was not his native language, because it allowed him to write more purely”, says Unger.

The researchers argue that although there are people who disagree with the interdisciplinary approach, this is the way of many continental universities in Europe.

“Within your discipline, you get comfortable; you can only get new findings when you try to understand interdisciplinary fields. Linguistics is already interdisciplinary: from neuropsychology to political speech analysis or to how we learn languages, interdisciplinary linguistic research is the future of science today”, Unger is convinced.